The brain is a strange instrument that is far too complex for anyone to fully understand. While it’s easy to take it for granted when everything is working as it should, its mysterious nature makes itself apparent whenever something goes wrong leading to a wealth of strange effects that are often very difficult to understand.

One example of this is ‘hypergraphia’ – a condition that’s characterised by an obsessive desire to write. The writing content and style can vary, but in all cases the individual will find themselves writing endlessly and feeling anxious whenever they stop. 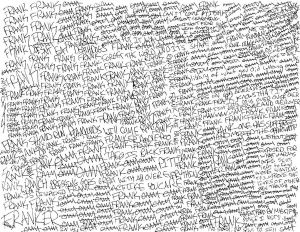 Hypergraphia can induce all kinds of writing ranging from poetry, to jumbled text, to repetitions of a single word. Sometimes this can yield creative and interesting text, while in other cases it will be illegible and apparently useless. In some cases patients will write down incredibly detailed accounts of their daily activities and others will even list what they see. A patient in one study reported ‘compulsive rhyming’ in their internal monolog lasting for five years.

Those with hypergraphia experience feelings of dread and irritability when their writing is disrupted.

Dopamine has also been thought to play a role, being known to decrease ‘latent inhibition’. This is an interesting thought that creativity could be largely correlated with the levels of dopamine between neuronal synapses. As with anything, there is such thing as ‘too much of a good thing’ as a patient with hypergraphia will attest…

Keith Hillman is a full time writer specializing in psychology as well as the broader health niche. He has a BSc degree in psychology from Surrey University, where he particularly focused on neuroscience and biological psychology. Since then, he has written countless articles on a range of topics within psychology for numerous of magazines and websites. He continues to be an avid reader of the latest studies and books on the subject, as well as self-development literature.

Say you’ve decided to set a new goal for yourself; either to lose weight, to set up a new business or to learn the…